Madame Soho is passionate about fashion, music, art, and literature and the ways in which they cross over and inspire each other. They are, after all, four significant forms that have over the years helped revolutionize British perspectives of society; and our beloved Soho is a social, physical and demographical embodiment of these forms.

For over a century she has been home to the creative industries. She is the space where the emergent youth cultures of the 1950s socialized, formed ideas around fashion, film and music, and paved the way for British culture as we know it today.

Historically and to the present day, Soho has been a space of diversity. A place where hustlers and villains mix with actors and members of London’s trans community, and where writers drink with sex workers – where else could so many ideas for artists, musicians and filmmakers be appropriated and turned into positive social commentary? It is a place, to some degree, still bohemian and outside the conventional structure of society. It has an air about it that is detached from the ever-increasing class-consciousness, sexism, homophobia and racial hatred that is being dealt to society by the right-wing media like a dirty batch of smack.

In fashion, the late Alexander McQueen reflected some of these notions. Like a true artist, McQueen had something to say about conventional norms but rather than paint or verbalize his commentary, he demonstrated it through the medium of fashion. And in the spirit of a true punk, he broke free from the social and political straightjacket with his subversive forms, shapes, prints, silhouettes, and fashion shows. He was an authentic modernist, working from his heart.

Sadie Clayton, the new British designer, displays some resemblance to McQueen. Not only because she’s revealed her working process at both Tate Britain and Tate Modern, but also because she’s not afraid to be authentic. The designer’s avant-garde work blurs the line between fashion and art, and her sometimes-irregular forms shows innovation, imagination and nerve.

Madame Soho asked the talented designer a couple of questions about what we perceive to be important: authenticity, and Soho as a creative hub: ‘I feel like the whole craftsmanship thing is coming back into fashion. And that’s why obviously we had the McQueen exhibitions at the Tate and the V&A, and my demonstration at the Tate was all about the arts and my craft. I think it’s really important to have a signature and stick to it. For instance, everyone down the line knows I work with copper, and everyone knows that I kind of think outside the box.’

Although Clayton hails from a sleepy town in Yorkshire, she presented her thoughts on Soho’s fading identity: I work round the corner and and go there quite a lot for a coffee or a drink. But I’m from Yorkshire and moved to London 5 years ago to study fashion at Kingston University, so I never really went out in Soho at that time, and never really knew the Soho culture. It was only when I watched a documentary on Boy George and the whole club scene I found out more. But also, they’re bringing London Fashion Week over there. I did notice recently though that one side of Berwick Street has all been demolished. It’s really sad. There’s going to be no original culture left. There’s a guy I know called George – he’s an original Teddy boy, really cool. He’s like the Soho guy. He was saying it’s really sad cause London’s going to become this whole new city and people won’t be aware of its history. It’s like Camden has changed and isn’t as good as it used to be, and Brick lane as well. And now Soho is going, every thing is being demolished. It’s really sad.’ 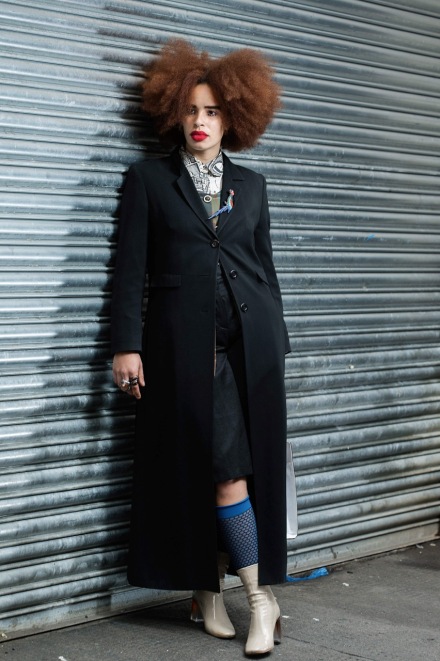